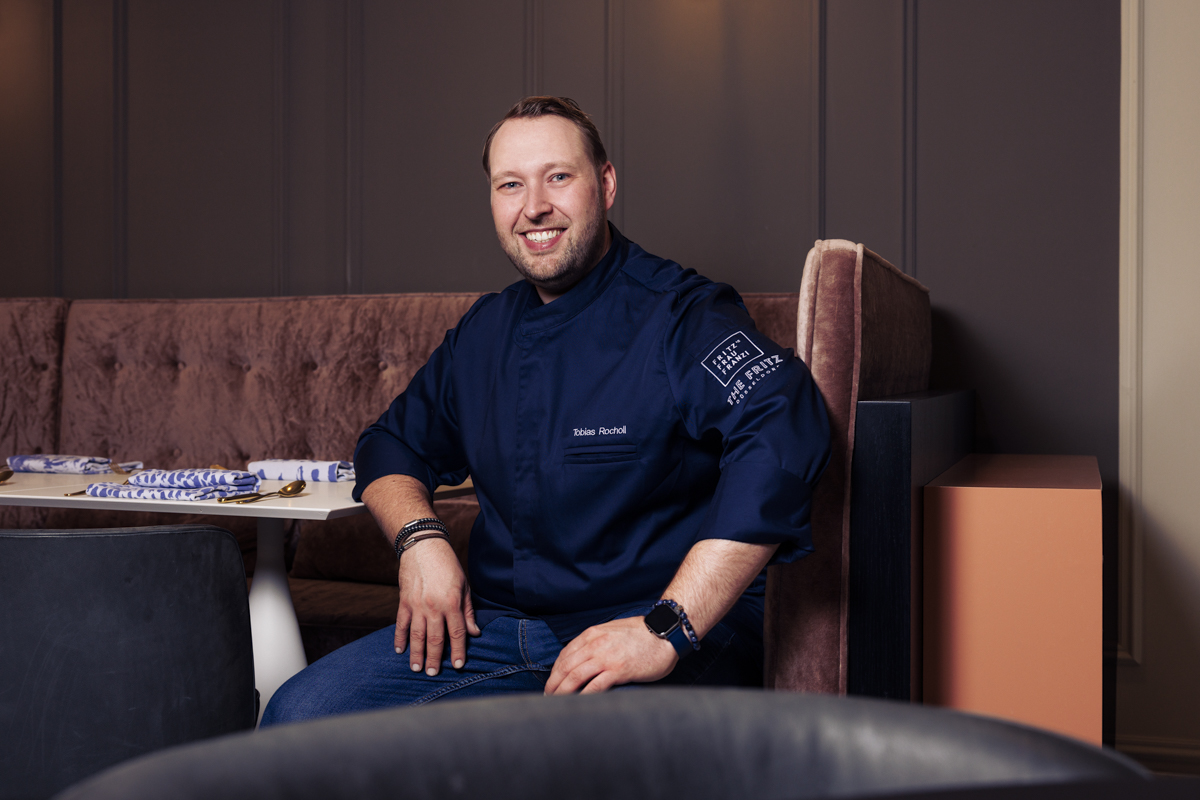 With Tobias Rocholl, restaurant FRITZ's FRAU FRANZI has brought on a new, forward-looking chef to bring it back to its roots as it celebrates its fifth anniversary. With a well-solidified position in Düsseldorf’s restaurant scene, FRITZ’s FRAU FRANZI is launching a new era in step with Tobias Rocholl and has consciously evolved the idea of no-inhibitions, casual fine dining.

FRITZ’S FRAU FRANZI, integrated into THE FRITZ hotel, represents “casual fine dining at its best”. Located in the state capital of Düsseldorf, it exudes metropolitan vitality and has made a name for itself in exceptional hospitality and an open, communicative philosophy. Its atmosphere and music reflect a sense of liveliness and lightness perfectly. Free from inhibitions yet still boasting highly professional service and cuisine, the restaurant fits seamlessly with the city’s urban flair. With new chef Tobias Rocholl, the premium restaurant with its refined, innovative culinary style is now entering an entirely new dimension. The fresh “Gourmet in action” concept will bring a modern focus to the Rhine metropole for its fifth anniversary. Vegetarian dishes are a matter of course for Tobias Rocholl. He considers working without any lactose and refraining from the use of industrial sugar an absolute must in today’s world and refutes any claims that the approach is contradictory to enjoyment. Tobias Rocholl has developed a concept that actively looks ahead: it does away with classic butter, lactose and even refined sugar, using good fats such as regional nut oils and olive oil, along with plenty of seasonal vegetables. Anything that makes it easier to enjoy a feast is welcome. But Tobias Rocholl doesn’t stick to any trends, instead preferring to find inspiration and his entirely unique sense of creativity in places where he can easily switch off and clear his head.

Even as a young boy, Tobias Rocholl only ever wanted one thing: to become a chef. In the form of his great-grandmother, grandmother and mother, the born-and-bred Remscheid native already had three good chefs at home to motivate him to tinker at the stove early on. More than anything, it was his great-grandmother’s braised beef that drew him in. To this day, he doesn’t have a favourite dish, but loves anything that has been prepared with love and without skimping on seasoning.

Tobias Rocholl completed solid training and a positive apprenticeship at the “Heldmann” restaurant in his hometown of Remscheid. He went on to work at “Charlemagne” in Aachen, the Wartenberger Mühle in Wartenberg and then “Petit Charlemagne” in Aachen, which saw him take on his first position of responsibility as chef at the age of just 24. Afterwards, he was drawn back to Remscheid to the very place he had completed his apprenticeship. As the chef there, he was responsible for precisely two awards over just six years: 1 Michelin Star and 16 Gault Millau points at the “Heldmann” Restaurant along with a Bib Gourmand for “Hearty, Classic Cuisine”, also at Heldmann. During the last three years, Tobias Rocholl supported the role of chef at gourmet restaurant “Brogsitter” in Gasthaus Sanct Peter in Walporzheim an der Ahr, where he was once again awarded 1 Michelin Star and 16 Gault Millau points. He has also picked up additional inspiration in practical workshops with Kevin Fehling and Joachim Wissler. As of April 2022, Tobias Rocholl is now the chef at the FRITZ’S FRAU FRANZI restaurant in Düsseldorf, where he is ambitiously yet flexibly adding new touches with his “Gourmet in action” concept. Tobias Rocholl’s favourite way to spend his free time is with his partner. He loves going out to eat and calls himself an “open book” – one which also reveals the fact that Tobias is an ingrained Schalke supporter.

And the service from